More than 47 million people have already cast their ballots in a record-breaking voting surge driven by the pandemic but Biden leads in national polls ahead of the election.

In the second and final presidential debate, both candidates were more restrained and allowed each other to speak.

Surprisingly they both used respectful tones even while attacking each other.

The tone change in the debate comes after a pugnacious first debate, during which Trump’s interruptions made him a less effective debater. 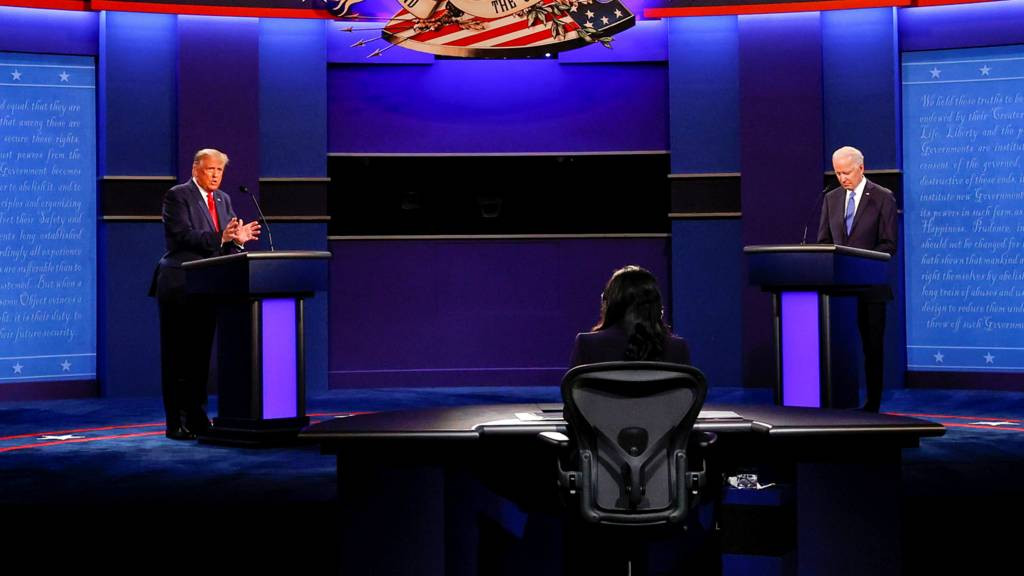 On the Coronavirus pandemic, Biden said he would not rule out more lockdowns, while Mr Trump insisted it was time to reopen the US as people were dying from lack of jobs and depression was on the rise.

Trump, said it was wrong to inflict further damage on the economy because of an infection from which most people recover.

“This is a massive country with a massive economy,” said the president. “People are losing their jobs, they’re committing suicide. There’s depression, alcohol, drugs at a level nobody’s ever seen before.”

“The virus is going away and a vaccine would be ready by the end of the year,”

Trump continued: “We’re learning to live with it.” Mr Biden, 77, countered: “Come on. We’re dying with it.”

Trump then cited claims Biden personally profited off his son’s business dealings in China and Ukraine.

Asked about his support for more lockdowns, Biden, a Democrat, did not rule it out.

Mr Biden laid blame for the 220,000-plus deaths from the pandemic at the president

“Anyone who’s responsible for that many deaths should not remain president of the United States of America,” he said.

Mr Biden warned the nation was heading towards “a dark winter”.

Mr Trump said: “I am the least racist person in this room.”

He brought up the 1994 crime bill that Biden helped draft and which Black Lives Matter protesters blames for the mass incarceration of African Americans.

Biden responded saying Mr Trump was “one of the most racist presidents we’ve had in modern history. He pours fuel on every single racist fire.”

“This guy is a [racial] dog whistle about as big as a fog horn.”

Trump brought up purported leaked emails from Biden’s son, Hunter, about his business dealings in China.

“I think you owe an explanation to the American people,” said Mr Trump.

Mr Biden responded: “I have not taken a single penny from any country whatsoever. Ever.”

Biden then referred to the New York Times recent report that Mr Trump had a bank account in China and paid $188,561 in taxes from 2013-15 to the country, compared with $750 in US federal taxes that the newspaper said he had paid in 2016-17 when he became president.

The two clashed again on energy policy, as Trump asked Biden: “Would you close down the oil industry?”

The Biden campaign afterwards said their candidate had been talking about ending oil subsidies.

Trump was asked about his policy of separating hundreds of children from undocumented immigrant adults at the southern US border to which Trump pointed out that migrant children were also detained under the Obama administration.

Watch some highlights below.